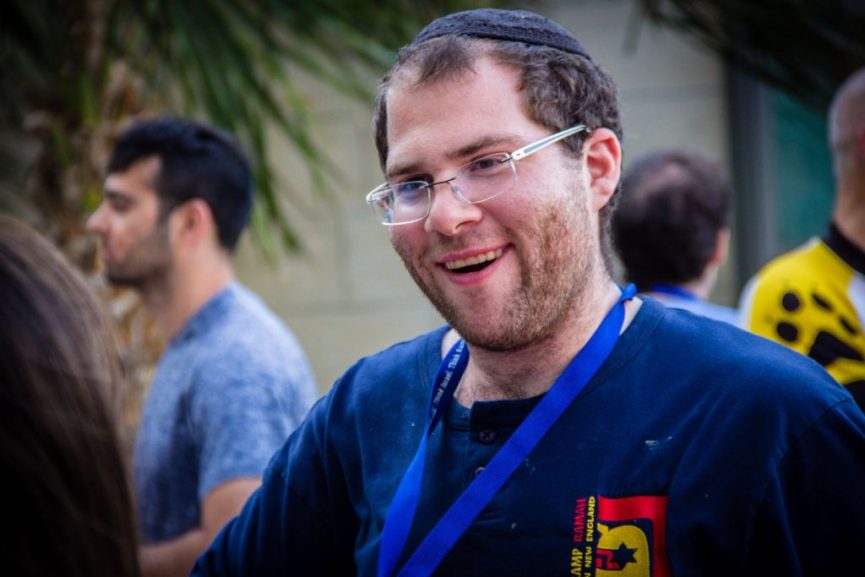 The following article was first published in the The New York Jewish Week.

Every two years, the National Ramah Commission and the National Ramah Tikvah Network organizes the Ramah Israel Bike Ride and Hike to support the TIkvah Programs for participants with disabilities in our nine overnight and five day camps.   For the past two rides/hikes, we have been blessed with the participation of parents of Tikvah campers; they eloquently shared their stories with fellow riders and hikers. I have long dreamed of the day a participant or graduate of the program would join us on the ride or hike. Might this be possible?

We all know that people with disabilities often have amazing abilities! Might a campers or alum with a disability be able to handle the tough biking and hiking terrain of Israel? After all, we did have an amazing rider who happens to be blind ride (with a partner, on a tandem bike) and come back two years later as a hiker!

This year, we were approached by Avi, a 30 year old man who grew up in camp and worked for many years in camp as a salaried staff member. He had participated on several Tikvah Israel trips (10 days Israel trips for members of the Tikvah Program) and wanted to participate in a “normal” trip. He regularly joins a local hiking group for strenuous 10 plus mile hikes and was up for the challenge. He did not want anyone to know of his past affiliation with Tikvah. This was no longer relevant, he felt, as he works full time, dates, participates in Jewish communal life, and is capable of handling such a hike.

But how would this young man do on a five day hike which is so much more than just a hike? How would he deal with getting up and out early each day, changing hotels every day or two, navigating social situations, living with a roommate? Thanks to great hiking skills, a winning personality, a desire to succeed, a wonderful roommate, and supportive fellow hikers, this young man (who happens to have Aspergers) was a huge success. And he raised the level of the hiking experience and overall trip for everyone.

-“We couldn’t keep up with him on the snake path up Masada!”

“We had such wonderful conversations on the trails about dating, about the Jewish community and more.”

Many programs for people with disabilities are “separate” and do not include ongoing, meaningful interactions with neurotypical participants. When people with and without disabilities share an experience and form meaningful relationships, they get to know each other’s strengths and weaknesses and can help each other grow.

A very experienced hiker in his late 50s shared the following powerful story. “I saw Avi’s pants were falling down and asked if he had a belt. At first, Avi got defensive and said, “Are you telling me that because I have special needs?” “I replied, “Avi, I would tell any friend the same thing. I wouldn’t want them to feel embarrassed!” Avi smiled. He earned that caring friends can point out fashion faux pas, and remind you to drink water and re-apply sunscreen. This is not a special needs issue—this is a caring friends issue. Social skills are best learned in the context of caring relationships in real-life settings.

I look forward to our next ride and hike in two years. I hope more riders and hikers with disabilities will participate. The participation of each unique rider and hiker enhances the ride, hike and Israel trip for everyone.