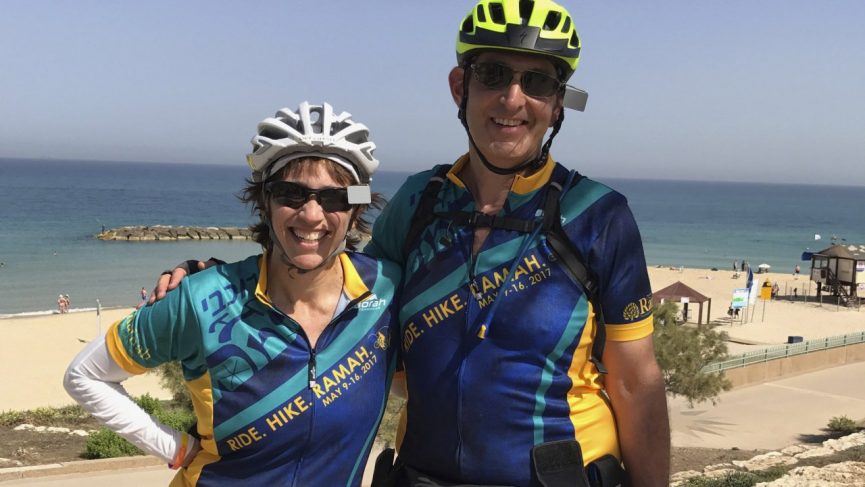 The following article was first published in The Jewish News of Northern California.

For Bay Area native Deborah Hoffman Gonzalez, it was a succinct checklist that inspired her to bike through Israel last month: the country itself, a love of cycling and helping kids with special needs.

The speech pathologist and Camp Ramah Northern California board member said participating in the fourth annual Ramah Israel Bike Ride and Hiking Trip fundraiser “combined all of my passions into one big Venn diagram: Israel, doing a multiday bike ride and Tikvah.”

Tikvah is the inclusive camping arm of Ramah that offers programs for campers with special needs. Camp Ramah Northern California, which opened in 2016 near the shores of Monterey Bay, is one of many Camp Ramah sites in North America to offer Tikvah programs: One serves campers in grades 4 to 12 with mild to moderate intellectual and developmental disabilities; the other is a vocational program for campers ages 18 to 26 who have special needs.

“Tikvah fits right in with Ramah’s core value of inclusion and providing a transformative Jewish experience for all kids,” said Rabbi Sarah Shulman, Ramah camp director in Northern California, which has the distinction of being the first Camp Ramah to offer Tikvah in its kickoff year.

In Israel, Gonzalez met fellow cyclist Howard Blas, the director of the National Ramah Tikvah Network. After working in the Tikvah program for two decades, working his way up from counselor to national director, Blas now oversees and consults nine Ramah Tikvah camps.

He called the Tikvah program in Northern California “bold, brave and pioneering.”

Blas and Hoffman Gonzalez were among nearly 100 participants from the United States, Canada and Israel who took part in the Ramah Israel Bike Ride and Hiking Trip between May 9 and 16. Ranging in age from 19 to 85, the cyclists and hikers braved an unanticipated heat wave and exceeded their goal of $450,000 by raising $473,000 for Ramah’s Tikvah programs. Blas was among the top 10 individual fundraisers, bringing in $13,923.

From the starting line in Ashdod to the finish at the base of Masada, cyclists endured 250 miles of changing landscapes while taking in views of the beach and the desert. They climbed 4,000 feet toward the Dead Sea and went up the hills of Jerusalem to Mt. Scopus. “We truly made aliyah as we climbed those hills,” Hoffman Gonzalez said.

The experience was a moving one for many. During a well-deserved respite on Shabbat, parents shared personal stories of their children’s experiences as Tikvah campers. For Hoffman Gonzalez, the most emotional moment came on a veranda overlooking the hills of Jerusalem on the morning of Shabbat.

“It’s just all about the people,” she said. “All of these Jews, all of these connections to Jewish camp, and being in Israel, I just had to pinch myself.”

The Cupertino native and mother of two former Ramah Ojai campers now lives in Sacramento while maintaining family ties to the Bay Area as well as friendships that were nurtured at Camp Arazim, a Conservative, kosher, Shabbat-observant overnight camp that closed down in 2000 after 30 years of existence.

“It was the overarching Jewish camp experience that helped forge relationships that continue to this day,” she noted. In fact, it was an old camp friend who reached out to Gonzalez about joining the Camp Ramah Northern California board.

Camp Ramah is the camping arm of the Conservative movement. It operates nine residential camps, five day camps and programs in Israel, bringing together more than 11,000 campers and temporary staff members each year, according to its website.

Last summer, Ramah’s new Northern California camp welcomed six 11- to 15-year-olds who participated in a range of activities alongside their typically developing peers. The vocational program, making its debut this summer, will provide opportunities to work on the camp’s grounds, for example, in the dining hall or helping take care of horses.

It’s because of those programs that Shulman, who took part in the 2015 ride and hopes to be there for the next one in 2019, knows the fundraising ride is so important.

“This is an opportunity for everyone to find their Jewish home, to walk hand-in-hand to the beach, and to sing and reflect about the week during Havdalah while shouting out shavua tov [good week!] to fellow campers as the waves crash in the background,” she said. “It is part of belonging, and about Judaism being uplifting and inclusive. We’re a community where everyone has a place. That’s what it’s about.”