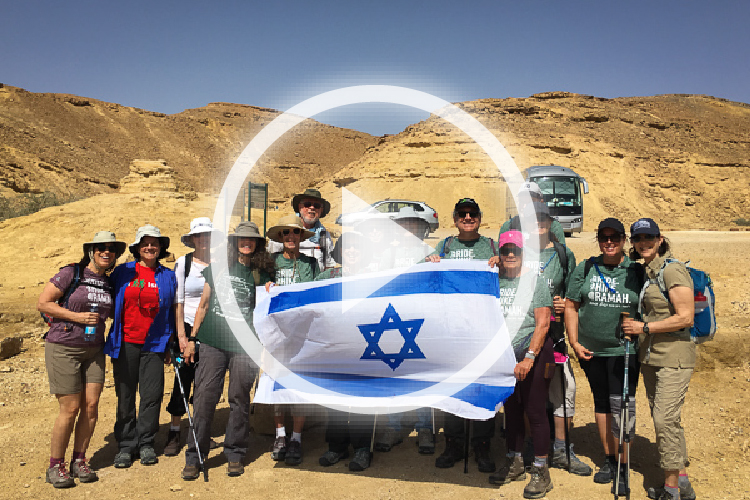 Video | Sunday, April 7 | Shabbat at Mitzpe Ramon was simply delightful. Beginning with Friday evening Kabbalat Shabbat services, all 112 participants came together as a community, united in the cause that we have all supported. We gathered outside as the sun was setting, joined by members of the local Masorti community who graciously provided us with a sefer Torah for our Shabbat services.

Following a wonderful Shabbat dinner, we all gathered for a discussion about the powerful impact of Ramah Tikvah programs on participants with disabilities, their families, the staff, and the entire camp community. Seven of our riders and hikers are parents of children who have participated in a Tikvah program, and they shared their moving stories about the difference that Tikvah has made in their lives.

After joyous and spirited Shabbat morning services, with song and prayer filling the room, we enjoyed a relaxing afternoon, followed by a magical havdalah service to conclude Shabbat. After safety briefings, veteran Ramah rider Mark Cohen gave a presentation about Gino Bartali, a world champion Italian cyclist who risked his life to save hundreds of Jews in Italy during World War II. 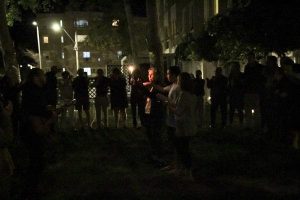 Today, our cyclists rode out of the hotel and, after a brief stop at the Makhtesh Ramon overlook to take a group photo, descended into the basin below. Later in the day, many of our riders rode along a portion of the Giro d’Italia ride, the race that Gino Bartali won in 1936, 1937, and 1946. Reed Schneider described the last portion of the ride as fantastic–“one of the best I’ve ever had”–going downhill, curving between two walls of rock.

Under bright blue skies and cooled by the desert winds, our hikers explored Makhtesh Ramon and Ein Saharonim, the makhtesh’s only natural spring. Once again, we were all overwhelmed by the majesty of the natural geological formations. Bev Alberga marveled at the variety of the different landscapes; Miriam Lefkowitz expressed her sense of accomplishment as she figured out her strategy for climbing. 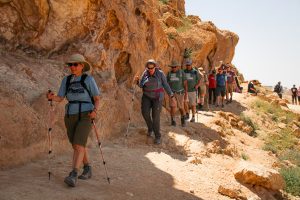 All of our riders and hikers met up at the end of the day at Kibbutz Ketura, from which riders will depart tomorrow morning and ride south to Eilat. From Ketura, our hikers traveled by bus to Eilat, where they will begin their final hike of the trip tomorrow.

Layla tov from Ketura and Eilat.